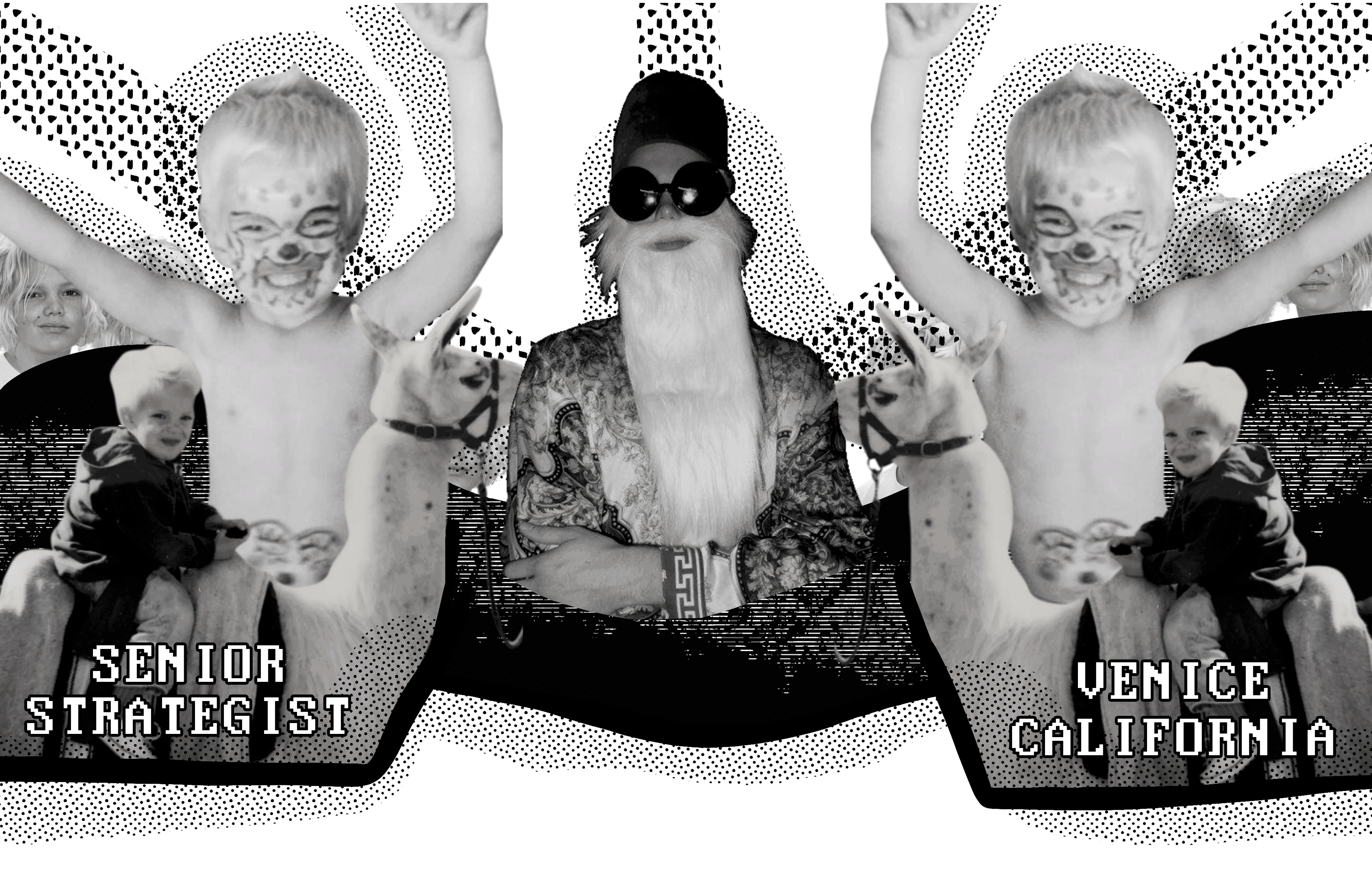 I'm a freelance strategist by day and a designer by night. For the past 13 years, I've helped create everything from communications and brand strategies for Fortune 100 companies to founding a vinyl record label that's sold out every release since 2014. I use my diverse experience in strategy, creative, and a dizzying amount of left-field curiosities to create strategies that cut through the clutter instead of contributing to it.

Sourced and co-hosted a scouting strategy workshop at Disney with Julian Cole, unearthing their brand and comms strategy for one of their brands for 2020

Pivoted a comms launch strategy (due to COVID) for Vice’s agency Virtue for Select, a leading cannabis brand

Rebranded and assisted in the creation of 26 strategy decks for Planning Dirty, helped grow the newsletter from 9,000 subscribers to 20,000 in 2019. Coded, designed, and co-launched Planning Dirty Academy

Created a music video treatment for Language Media, winning the pitch for an upcoming Blink 182 release

Produced the sold-out "Strategy LA" at Deutsch in conjunction with heads of strategy at BBH, TBWA MAL, 72andSunny & Deutsch

THE YIN TO MY YANG

Added 130 hours of music to Rainbow Jeremy FM and we sold out our latest vinyl pressing at Parang Recordings.

As we enter a new decade, I thought it’s worth sharing my collection of 1000+ old print ads I’ve scanned from Time, Sports Illustrated, Playboy, and Surfer Magazine to name a few.
Ranging from the 1960s-90s.

I hope these ads stimulate some ideas, laughs, pensive brow furrows, and grunts of utter disgust. We’ve progressed a long way since the mad men days of the 1960s, but that doesn’t mean there isn’t some gold waiting to be mined and some silver waiting to be polished.

Your place to find all the ad creative you’ll ever need, quick. Whether its display ads, TV ads or Facebook Ads, this is your rapid fire way to do competitive research on a category.

Over 500 links so far from 200+ companies that will continually updated as I pick up projects in new categories.

I'm a huge fan of random generators to break me out of visible and invisible routines and biases. I figured it would be useful to make something similar for when I get stuck in the research & insight phase of projects.

The tool randomly generates different questions and suggestions to shake things up when you hit a wall researching and unearthing insights.

"Can we think out loud and messy and try - just try - to find a thread from problem to comms idea and tactics in less than an hour and then draw it up? Will any of it make sense?

This time, we brought in Davis Ballard who provided research support (Thanks, Davis!). This is hypothetical thinking. And it's an unedited pod. If you think you can beat it, beat it!"

Life is too short to live as a bystander. You have to be an autodidactic, rule-bending heretic with a propensity for kicking down doors to expose all the juicy nectar hidden within. It takes not only accepting being different but embracing that difference and loving your inner Dennis Rodman just as much as your inner Siddhartha. I mean aren’t we all just a collection of fluctuating avatars living in each other’s swirling minds?
‍
Onto my avatar/story, since 2007 I've danced in all sorts of mediums and verticals finally settling in strategy. I enjoy painting with all the colors of the modern marketing palette and take pride in creating unique solutions for each project.

After moving back to the West Coast, I started fresh and created JUMBO as a brand to perform my freelance strategy projects under. Since moving back I've worked with brands ranging from Disney to Harvard and spent the last year partnering with Julian Cole on strategy projects and the creation of his Planning Dirty Academy.

Moving back to the West Coast after 14 years out East brought back my love for dusty soul, jazz, reggae and other sonic obscurities. The answer was creating something I could add to daily and that fit my every mood just by pressing play. I wanted something alien yet familiar, controlled yet spontaneous, out came Rainbow Jeremy FM. If you hear any vocal interludes in a German accent, that's me ;)

What happens when three friends want to hear different music and expose new talent? They start a vinyl label. Among other things, I created the complete brand identity for Parang from the name to the logo and directed the creative for all five sold out releases. In 2017 we secured a distribution deal with Subwax BCN, one of the premier tastemakers in the underground house & techno scene.

In 2014 Google got much smarter. It went from a game of growth hacks to "content is king", Gurus NYC was our response. I co-founded Gurus NYC with a new friend who had made half a million in digital marketing before he turned 18. We combined our talents to turn Gurus NYC from an idea to a A-Z digital marketing agency that served some of the biggest names in healthcare and non-profits.

After testing out the music industry I was seduced into the startup world where I was hired as an associate creative director at Factory Floor, a technology incubator in Soho. Being the youngest member of the team by over 10 years I was able to learn from co-workers who managed had campaigns for Google, Apple, Nike, Coke & Motorola while in management roles at top shops such as Ogilvy, Edelman, MTV, Time. During my time at FF I created everything from graphics to content to IOS wireframes to brand identities.

My dreams of working in music came true when I was hired as a jack of all trades at talent agency World War Trading Co. While at World War Trading Co, I signed two artists, created their blog, managed their website, and distributed email marketing campaigns which reached over 100,000 music industry professionals each week.

After cutting my teeth DJing, I saw an opportunity to continue my marketing, throw  events, and make some money. I partnered with a local promoter to finance the parties while I managed everything else, selling tickets, promoting & branding the events and finally DJing them open to close. We grossed $60k in under four years.

Looking to soak up experience from a seasoned DJ, I founded my first company to promote interviews for an XM radio host in Boston. I edited and promoted Youtube videos gaining 1 million views for clients and helped launch Mass Movement Radio which featured guests including Kanye West, Diplo, Moby, Russell Brand, and Lady Gaga.